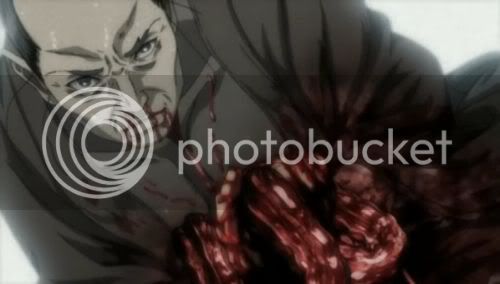 1. Stylish, tense and extra violent. I love the contrast between light and dark, the traditional feel. The background music is superb. Pulling out your own intestines in a protest is surely a great opening to a story? I love the seriousness after the light-hearted anime I have been watching. The architecture is ominous, the music threatening, the facial close-ups are beautiful. I love historical anime, yay! I love anime when it feels like a moving work of art. Two wounded men fighting makes for fascinating watching. The anticipation and high pitched ringing of the swords is wonderful, unbearable! The historic flash back heightens the tension. A history of deforming members of another dojo just to send out a message of strength is so horrible! Ending on a cliff hanger, this already feels miles better than the other summer series I’ve watched so far. The end music is disappointing, too dull.

2. The cicadas are ear-splitting. I love how visual this is. The inner flashes of muscles beneath the clothes like ink brush strokes are pretty. The sound of splintering wood – the sound effects in this still impress me. Even the sexual images are pretty, and everything seems subtle and poetic. Slicing the bean on his forehead is a little weird. I’m not sure what to make of this, is every episode going to be a series of fight poses and blurred snap shots? I feel compelled to watch more though…

3. In a way I would like less arty bits and more inner dialogue from the minds of the characters, I want to know more about how they feel. The straining of the muscles and the sounds make it almost painful to watch, as if it’s hurting your muscles as well. What a lovely father, I don’t care if one of them is going to hurt my daughter I just want a strong grandson. I am so glad I am not Mie right now. The sexual scenes are becoming quite uncomfortable to watch, seeing blood isn’t exactly nice. Says a lot about the bond between the twin brothers though when they like to take a man each at the same time. 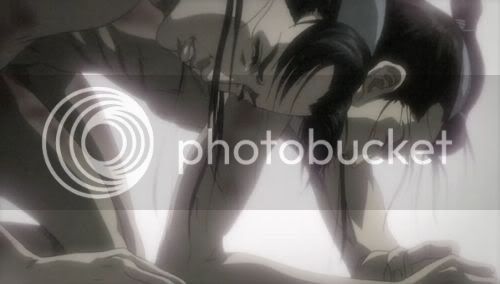 I love the image of the twins standing back to back, facing each of the warriors.

The flow grip is so hideous, the blood oozing out of his broken skull. The sexual scenes are almost as tense as the fighting! I certainly enjoyed this episode more than the last. I was beginning to worry the fights would lack oomph but the scene in the woods proved me wrong.

4. The use of song in this makes it more like a horror than a drama. Watching a girl having her head sliced in two is surprising!

I’m a bit lost now. There’s no need for animal cruelty, I happen to like cats. :'( Noone is going to slice things on any part of my body, at least the females in this have nipples drawn on.

5. Now it’s all RAW. :( I am going to be totally lost, but the soundtrack and artwork make it worth watching. I’m sure there are more surprises. Poor Fujiki, Irako is a monster, I hope he kills him…when we finally move past the back story and see the final fight. I love the cinematography, it feels so well thought out. I’m a little freaked out by the spiders and that man really loves his daughter. Yuk. He ripped off the tip of her nipple!! So happy that Kotonoha has translated some of the manga, I can’t wait to see how it compares. Only four chapters translated out of nine volumes; what a lot to look forward to. I hope that this series is continued to be subbed or blogged properly by someone who knows Japanese! *Pleads*. Irako killed his own mother? A bleeding snowman (I’m so lost). I seriously need to learn Japanese soon!

6. Women seem to get tied up an awful lot in 17th century Japan. I feel the same kind of fascination with this as I did with Akagi, it doesn’t matter what happens, just the style in which it is done which drives it forward, yet this is moody and scary, and Akagi was adrenaline pumping and elating. You can feel that back twisting, it’s so painful to watch! Fujiki and Irako face each other yet again! Is that a didgeridoo noise in the background? I don’t know enough about musical instruments. The fighting it like dancing or a weird mating ritual of poses, I love it. Mie put a steaming hot iron on his…balls? Jesus. Blue fire, red moonlight and dead cicadas; is this some kind of dream/test? Swallow nests remind me of my childhood… mine weren’t cut up though. This music is beautiful and building up while she thinks of her past! Aaaaargh, I need to know what they’re saying! At least now I know how Irako was blinded.
7. Is that a girl with a boy’s haircut kicking ass? No, a feminine looking boy, many new characters *looks confused*.

I’m glad they’ve included the muscle detail like on the manga covers, but left out the huge amount of blood that made it look cluttered. Fujiki can destroy a human face with a few fingers?

8. Afro Samurai could only ever dream of being this cool. Suzunosuke didn’t live long! I liked his character :( Irako on the bridge, only this time not to seduce a little girl but to fight! Self pleasuring by mouth?! You get the feeling he was mad about the boy from his mental pictures.

9. I’m confused and I don’t like seeing women emaciated and abused. :( Mie looks like a frightened wild animal. Totally lost now, enjoying the visual experience ^^; I should wait for subs but I’m too impatient for the pretty pictures. Who takes a sword with them INTO a bath?! So we get to see how Fujiki lost his arm.

10. I’m guessing that’s an evil grandson? The little bald guy is totally creepy. OK I reeeeeally need subs. This is not something I can enjoy watching raw because I need to understand the motivation behind the violence. It has been a more memorable experience so far than the other summer series I watched, but it’s a bit too depressing for me to watch it again.

11. Completely and utterly lost now – but I can’t wait to see the last episode!

The manga scans are worth a look for the artwork!