I was upset to find, that the Japanese OCS Book storeÂ I walk past everyday has closed down. Well I did wonder who was buying all the expensive Shugo Chara merchandise…clearly no one! I guess there’s just not enough interest for a little shop in an obscure location in Ealing.

If you are a rich anime fan, then The Animation Art Gallery has Afro Samurai art, signed by Samuel L. Jackson for Â£125 only 6 left!Â There is also some cheaper Afro SamuraiÂ art at Â£25 if you’re feeling poor!

Cosmode has a free issue online so I thought I’d register and take a look. I’ve only cosplayed once as Natsuki Kuga. I wonder if reading this will inspire me to cosplay again. Well I flicked through and wasn’t inspired, I expected interviews with the cosplayers about how they made their costumes, and maybe costume patterns -Â not pages and pages of photos.

When introducing a friend to April’s season of anime, the worst two episodes to randomlyÂ watch are a yaoi, where a man goes running into another man’s arms, and a detective show where two of the officers have a bizarre yaoi moment and a mad man runs off with his wife’s brain… it’s not really going toÂ showÂ them why youÂ loveÂ anime! ThenÂ I raved aboutÂ Kaiji, only toÂ happen uponÂ the one episode where he’s working in a shop and nothing adrenaline pumping exciting happens. Gah!!Â The two series I feltÂ I might enjoyÂ were Toshokan Senso and The Tower of Druaga: the Aegis of Uruk (althoughÂ I might change my mind when I’ve watched both episodes all the way through). I used to watch the first episode of anime all the way through and decide whether to drop it or not at the end, but I’ve become impatient and time conscious, dropping series ruthlessly for poor artwork, and all the usual cliches that leave me feeling something is lacking.

I’m quite surprised to be enjoying Armored Trooper Votoms: Pailsen Files. Army mecha doesn’t rush to mind as a genre I’d get really excited about, but now that Chiroco’s mysterious past is coming to light in episode 5, I’m really excited about watching episode 6 when I go home tonight! I was thinking howÂ I was enjoying it in the same way as I enjoyed FLAG, albeit a little less arty, and it turns out they have the same director.Â It’s not just the one character it’s the teamwork, the character disputes and the feeling of an evil conspiracy that keeps me watching.Â I’llÂ aim to finish watching Bamboo Blade and Kaiji this week, and catch up on readingÂ Vinland SagaÂ such a huge backlog! Better there’s too much to watch than not enough :) 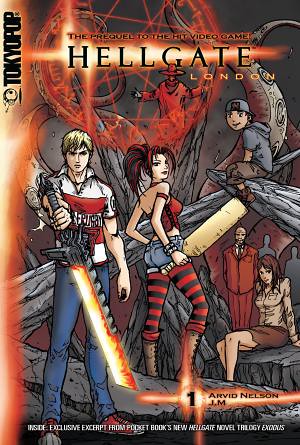 This isÂ Tokyopop’s prequel to the game of the same name covering the experiences of John and Lindsey Fowler. Unfortunately, the majority of fans, apart from the uber hardcoreÂ obsessive ones, will be disappointed by this weak horror which seems confused about its target audience.

That said, there are some things I love about this manga. Lindsey Fowler has a memorable attractiveÂ character design. I wasÂ delighted to see a girl whacking aÂ demon to death with a cricket bat, especially when it meant herÂ role in the violence matched that of the generic male lead. I particularly liked the image of her face as she first sawÂ LondonÂ destroyed by demons.Â The moment when the demon arm sticks a finger up at John’s ancestor and chooses to bind withÂ John insteadÂ was a pleasant surpriseÂ that brought some much neededÂ humour (I doubt anyone would find the lame Eastenders joke funny). The plague doctor character was novel, although it’s difficult to find a guy wearing a giant beakÂ very scary!Â The crazy sandwiches made the brother likeable, so it hurt more to see his decapitated body at the end of theÂ volume.

The character art was good, it just felt more like a western comic than a manga, whichÂ jars withÂ me because the main reason I transferred to reading manga was for the different art style. While the clash between the Knights Templar and the Cabalists gave it more depth, it could have been used better to give the story aÂ moreÂ foreboding atmosphere,Â rather thanÂ simply forcing the siblings to take different sides. The novelÂ preview at the end was moreÂ enjoyable, I liked the description of Warren’s inner torment as a demonÂ controlled his body, forcing him to kill his fellow human beings on pain of death if he chose toÂ disobey. It made me wonder if John will lose control and end up being taken over by the demon arm, which would make the story more gory and interesting, or whether the generic male lead triumphs and turns out to be the one cabalist who is stronger than a demon *yawn*.

My major problem is that this is advertised on the back as a horror, but for the most part feels like a fantasy, with a magic sword, magic pendant and mysterious ancestry. The background art is poor, something that needs to be well done to give a horror that creepy feeling. The dialogue is disjointed,Â attemptingÂ to throw in a random accent from time to time, and the comments madeÂ by grown-upsÂ to theÂ kids:Â “I know you’re a good boy Johnathon” “Ah, Love everything’s worked out delightfully“,Â isn’t a believeable response to a teenager who’s just been caught digging up a skeleton!!

I’d like to read theÂ next volume if they increase the violence and the horrifying images, here’s hoping to seeÂ all the rugby loving chums ripped apartÂ by demons! This manga ultimately falls down because it feels like it’s aimed at younger teensÂ but it’sÂ given a 16+ rating. I had a quick flick through the Dark Horse Hellgate Comics and what stood out to me was that theÂ female character art was hotter, and there was much more gory violence, more likely to encourage someoneÂ 16+Â to pick this up as a horror title. You can preview the first four pages of the Dark Horse Hellgate Comics here.

Many thanks to Tokyopop for providing the review copy.