Now we’ve hit the anime where there seems to be a little bit more depth to the plot, artwork or just something funny or cute that caught my attention…

I tentatively place this at number 9, it may turn out to be wonderful, but I can find nothing about this other than slightly promising images on the website. I think some people will be put off this by the computer graphic style but it could be cool? A boy being sent back in time to the silk road in China certainly sounds like it might have a few cultural points of interest but I guess it might be quite shallow if it’s aimed at the kids?
8. Koi Suru Tenshi Angelique ~Kokoro no Mezameru Toki~

I’ve discovered I like reverse harem bishi fests like Haruka 8. However, I feel the male characters have too much of the ‘ridiculous’ factor for me to enjoy this series, especially the one with pink/yellow hair (!) and the lead girl looks a bit plain. There are a lot of lovely screencaps of the bishis in all their glory here, by Novastorm.

This gets slightly higher up on the list due to the ‘cute doggy’ factor.

It seems the human characters have doggy counterparts? Anyway, the art looks cute, as do the opening theme, and ending theme (doggy romance?!). Unfortunately, it does look like it’s aimed at the young ‘uns, and the character design is nothing special, so I’m not placing it higher on the list even if it does have cute doggies. Matthew has been blogging this kawaiii series here.

I watched a random episode of this raw, and even though my Japanese is too poor to understand the dialogue it was pretty clear what was going on. These boys are the typical bishi boys with girlie emotions, and to be honest I’m highly surprised no-one has been blogging a HARD GAY parody of this, because 1/3 of the way through I ended up thinking, ‘Hmm which bishies should pair up and bonk?’ 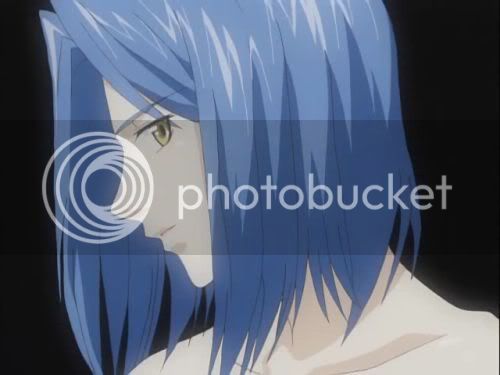 (He shouldn’t smile with his mouth open and shut his eyes…not in this house.)

Also, I ended up inventing a very different translation of what they were saying…”in my miiiiiiiind”. Oh, and they have a butler called ‘Butler’, which I find highly amusing (thanks to Cinammon Ass and his review of episode one for that.) So why is this higher up the list? Entertainment value, and the fact that the bishies are relatively attractive. It still seems very silly nonsense for yaoi fangirls (and gay men?) and I’m left highly intrigued by the psychotic bunny ‘thing’…

This is a remake of the now rather dated original. I’ve put this higher up the list as despite a really ugly set of character designs, the horror artwork on offer is quite impressive in places, and I do like a good bit of horror and gore.

It’s a shame Bem looks like a frog, eugh! There are lots of big screenshots of this on the website if you’re interested, and WRex has blogged the first 7 episodes.

Even though this seems aimed at children I love the look of this because of the cute, zany, funny characters, especially these two:

Did I mention how *INSANELY CUUUUUTE* (and a bit evil) this was?

The character design is clear and simple which makes cute kiddy anime sooo much better.I don’t feel I can put it any higher up the list due to the ugly bunny, which reminds me of Miffy, ik.

Matthew has blogged a random episode here. If you like cute, violent and funny anime you HAVE to watch Ebichu the housekeeping hamster – incidentally Ebichu is directed by the same person who directed Onegai My Melody. ^_^

…and various other costumes it seems ;)

On reflection I might have been better off putting this further down, as I’ve now read that the OVA original was entertaining and this is just silly. Nevertheless, an anime that takes the piss out of a whole host of animes makes me giggle, and I want to watch it and giggle some more! White Sonata has blogged the first episode here. Oh, and there are some lovely cosplayers of this anime…