Just went and had a quick look at the IMAF Festival at County Hall (home of Manga Cafe and London Aquarium) – it’s dead easy to get to, although there were so many tourists crossing the bridge from Westminster tube station towards London Eye…and what’s with the roasted nuts and icky hot dogs on sale, why can’t we have tasty pancakes and waffles instead like in Paris, things I might actually buy or eat!
This is a compettion that allows non Japanese people to submit thier artwork and win lots of money – some people actually wont go as it’s not ‘Japanese’ enough for them…which makes me sad, as some of the artwork was simply wonderful (see below)!

I didn’t see that many cosplayers but these girls looked cute so i asked them to pose :)

Highlights include – 4 rooms screening anime. They are screening different anime in all the rooms, and it’s FREE entry – so, if you live in london, and don’t have fansub download ability this is your opportunity to see lots of free manga HOWEVER, some of it is dubbed. Anime being screened tomorrow-tuesday includes…Cromartie High School, Noein, Gilgamesh, Naruto, Otogi Zoshi, Serial Experiments Lain, GITS, Elfen Leid, Paranoia Agent, Requiem From The Darkness, Chobits and Get Backers.

There was a trading area, Tokyotoys are there with all their lovely figurines, there’s another stall with the typical naruto/fma/fruits basket/death note stuff on sale, with some huge wall scrolls and posters of various things. I almost bought a death note bag, but to be honest I use these events to browse so i can buy things cheaper online, at reasonable prices.

There were lots of Tokyopop/Tanoshimi manga – but again, even at 10% off (Â£6.30) it’s still a lot when you can get it from the net at about Â£4.30-Â£5.30 per book (and that’s including P&P). They were selling a book with manga from International artists, but it didn’t look very pretty. It’s a shame they weren’t selling souvenir leaflets with shiny colour photos of some of the most beautiful entries.

Manga tour of Japan holiday was being advertised (well yes, great, LOL if i had a spare Â£1250 or whatever it is I’d love to go, but my spending consists of the odd manga book to read on the tube at the moment!)

The events seem the moet interesting, it was a shame i couldn’t stay for the cosplay catwalk (I have a 2500 word essay to write for monday and another for friday – aargh). I also missed a talk about Mangaka in the UK by Paul Gravett (of ’60 Years of Japanese Comics’ fame) but he’s giving a few more talks, one on Monday on ‘Manga Storytelling’, and one on Tuesday about ‘How to draw Global manga’, there is also a kimono and sushi making demonstation in the main hall tomorrow.

There were 3 main issues I had with the event:

1. the hideously ugly design on the orange/green poster everywhere – yes it’s eyecatching but for all the wrong reasons!

2. It’s not well sign posted, once you get in on the aquarium side there’s no sign pointing that you have to go up the stairs to see the exhibition, and you have to wander through various halls and corridors (it’s got that boarding school maze feel) to find anything! i would like big idiotic orange arrows on the floor!

3. The space is too big for what they are doing, there weren’t enough chairs or comfy sofas around for people to feel they could stop for a length of time and chill out, it felt like you walked through the maze and then left – i wonder if anyone stuck around for any significant amount of time.

That said, I felt it was worth going for the pretty pictures…here are my favourites, I wonder if any are the same as the one’s you noticed as you looked round… 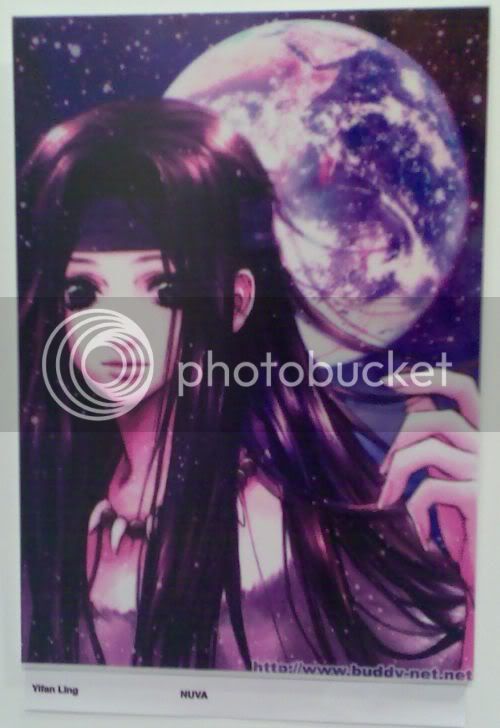