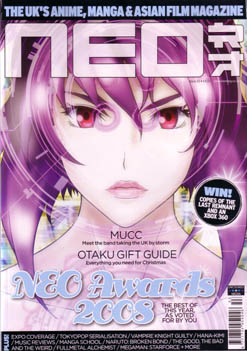 I would love to have a degree in the feasibility of Gundam technology, I could be building my first giant robot right now…maybe!

Ooo, a 10% discount at Orbital Manga…doesn’t say when it is valid until though.

Elfen Lied – been on the backlog a LONG time.

The Girl Who Leapt Through Time – only seen first 20 minutes!

Gilgamesh – seen some of the dub on the UK Anime channel, so now I need the sub, the world reflected in the sky, dystopian times, mmm.

Haibane Renmei – I watched the entire series 3 years ago, and it’s good enough to see again, considering I cried after the last episode because it was so good and I didn’t want it to finish.

Neon Genesis Evangelion – ooo a shiny metal box, will I like this more than Layzner?

Noir – considering I lovingly paid out Â£20 each for the first three dvds five years ago I should get the complete collection and see the ending!

Witchblade – I like the female character designs and figurines, story didn’t grab me enough. I bought a Top Cow Witchblade graphic novel last week and all the pages are falling out :/

Want to read NANA and D.Gray-man.