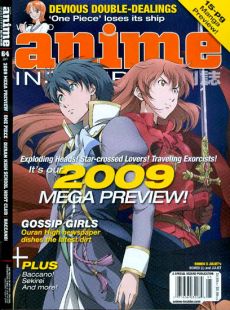 I hope they don’t waste a page writing about Stitch when there are so many better series out at the moment to write about, and I don’t want to read articles about Japanese recipes, that’s what cook books are for!

Yes. Gegege no Kitaro should get aired on TV, maybe it’s too expensive or just too weird for them?

I hope something does happen in Moribito, because I’m looking forward to it!!

Sekerei just reminds my why I lean away from anime with gravity defying lemon boobs.

Yay! Tytania gets a mention, in a tiny little box in the corner…

Afro Samurai seems more suited to a videogame release than an anime or manga. Stylish violence and revenge although I’d rather be playing Kung Fu Panda, cuteness wins over blood if something doesn’t display much depth!

The Vocaloid Figures I’ve seen are very cute, but after hearing the Engrish version of a Little Mermaid song it’s just not hot!

I loved the chaotic madness of Excel Saga so perhaps I will also enjoy Baccano.

So it has taken over 2 years, but looks like D.Gray-Man will be the next BIG THING for everyone in America to get obsessed over. I’m more interested in the hopefuls Monster and Nana.

Tweeny Witches seems to have slipped under my radar, but mention Studio 4C and suddenly I want to watch it.

One weekend I’m going to marathon lots of Aria, and end up feeling very chilled with an insuppressible desire to sail away in a little boat somewhere beautiful.

The Togainu No Chi preview appeals because of the setting in a broken city, however, the art could be better and I wasn’t left feeling very excited about the story.

Yay, the Kurosagi Corpse Delivery Service is almost up to 8 volumes, something to catch up on I know I’ll love, this had some of the best editing notes in the back I’ve ever had the pleasure to read.

How bad could a Tokyopop manga version of CSI be? I’m going to regret saying that aren’t I?