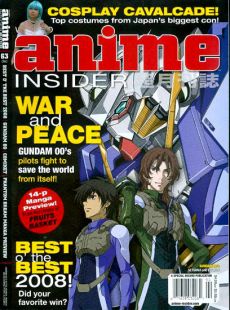 Hamtaro is not the best big-eyed hamster! EBICHU IS! Clearly the Assistant Editor knows nothing. “Shaaaaa.“

The T-Virus Antidote Resident Evil energy drink is red and shiny, I want one!

Anime to catch up on:

Linebarrels of Iron – can’t remember what I didn’t like about the first episode apart from the scratchy blush marks which annoy me, maybe I’ll give this another look.

Moribito Guardian of the Spirit – about to watch this series, so I hope she really is the best heroine of 2008!

Mushishi – will the live action film have the same impact as the stand alone episodes?

Red Garden – I can forgive the singing moments for the bit when the girls see their real bodies lying in coffins. MARVELOUS. I have to know their fate. The big noses really didn’t bother me.

The Wallflower – it made me giggle, I kept missing out episodes, wasn’t there a mad aunt who arrived in a helicopter or something, and lots of nosebleeds and goth-loli girls? *Gets bumped up the list of anime to buy*.

Welcome to the NHK – it made me aware of Hikikomori and I can still hear the purupurupurin song in my head!

Manga that must be read:

Blade of the Immortal – I bought the first 2 volumes, can’t believe it’s up to volume 20 now! I really want to read this, especially now I’ve seen a little of the anime and been disappointed with that adaptation.

Monster – I have about 35 episodes of anime to get through, and then no doubt I will be hungry for the manga.

Moyashimon – Thank you Del Rey, I need cute microbes in my life.