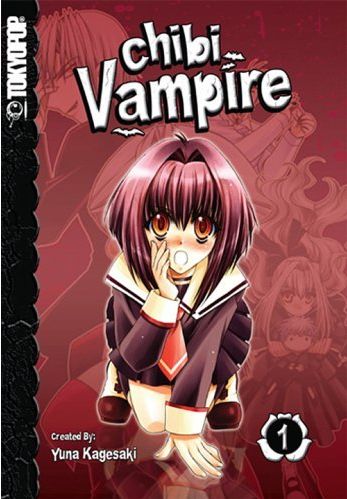 When you discover a Tokyopop vampire manga for older teens labeled as comedy/horror, you might expect seductive creepy vampires, but Chibi Vampire turns the normal vampire story on its head. Karin gives people her own blood, instead of taking it away! She is embarrassed about being a vampire, and tries her best to hide it from her school friends, however, this becomes difficult when Kenta the transfer student turns up and has an unusual effect on her blood levels. On top of that, Kenta gets a job at the restaurant where she works, is Karin going to be able to avoid him for the rest of her life?

The art spoils this series for me; I wasn’t keen on the art in the anime version either.Â  The character designs themselves are ok, I like the fact that Anju has a puppet on one hand (it reminded me of Kurosagi Corpse Delivery Service), but there isn’t a lot to differentiate the characters from hordes of other manga, other than the fact that some of them suck/spurt blood! Perhaps Tokyopop should have named it Misfortune Vampire or Karin, considering there really isn’t anything chibi about this volume, in fact, it might have benefited from chibi artwork in places, especially when Kenta is trying to work out why Karin is acting all weird around him. There isn’t much in the way of background art, and I expect more from the whole page character drawings, although the one with Karin looking out of a coffin is quite cute. Sometimes the arm/leg artwork seems lazy and a bit off. What Yuna Kagesaki does do best, is a crying girl with a bloody nose!

I particularly like the originality in this. A vampire who gushes lots of blood from her nose is funny. I also like the fact that it’s not just anyone she desires to give blood too, and that at the end of the volume we find she craves blood of the misfortunate, and giving them her blood improves their fortune. It is also funny to see Karin constantly running away from Kenta in case any prolonged contact causes her blood levels to rise to disastrous consequences. It is amusing that Kenta thinks Karin is a prostitute, and that when he goes looking for her house, he ends up being confused by magic and walking round in circles. However, there is not that much depth for something aimed at older teens, and I imagine some people will be disappointed.

The story revolves around Karin and Kenta, so your enjoyment of the volume will really depend on how annoying you find Karin’s cowardice, and Kenta’s confusion. Karin’s siblings seem more interesting as Anju is destined to be a great vampire, and Ren gets around de-stressing young women. The friend Maki is really rather dull, but the feisty mother Calera makes up for it, when she gets upset that her blood wine is not a destructive enough liar. I am left wondering how Karin will benefit Kenta’s misfortune and whether she will develop other unknown and unusual vampire talents.

If you are a fan of Chibi Vampire, you might be interested to know that Tokyopop publishes volume 11 this month! There is a 25 page preview for you to enjoy. They also publish the novel version.

Thanks to Tokyopop for providing the review copy.