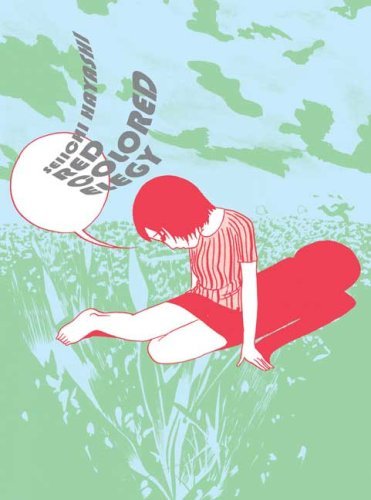 “I wish everything, and everyone, would all go to hell, to hell!“

Red Colored Elegy by Seiichi Hayashi is a brightly coloured hardback published by Drawn and Quarterly in dramatic contrast to the raw, depressing honesty of the manga. This is a refreshingly dark, emotional, artistic manga from the 1970s that will draw you into the personal life of one man.

Ichiro and Sachiko have a difficult relationship, Ichiro is unhappy because he wants to earn money as a manga artist, but instead works for an animation company. The strain on their relationship is conveyed through scenes and body language more than dialogue, often the silent panels speak louder than any other panel sequences in the book about how the characters are feeling: 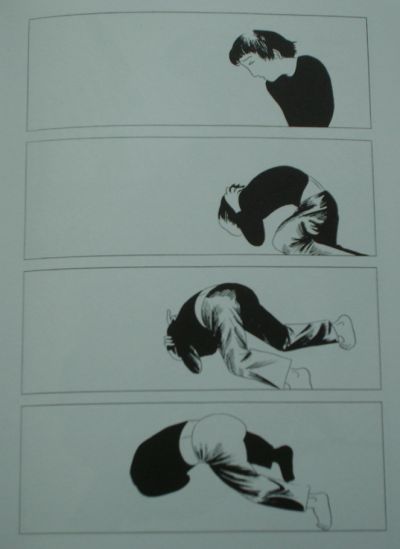 This is a welcome departure from the reams of manga that transport you to a naive fantasy world. This brings you down to reality with an uncomfortableÂ  thud. It examines the relationships between Ichiro and Sachiko, the problems of arranged marriage, their combined fights and failings, their fears, and the death of Ichiro’s father.

Hopefully it will inspire other artists to draw with such emotional honesty, highly recommended for collectors of unusual manga titles.

Art – 10/10 It is incredibly difficult to rate such a unique art in manga, some people will love this, some people will find it wildly pretentious maybe even ugly. One thing is for sure, the minimal art style fits incredibly well with the content.Â  The lack of detail or background art successfully carry across the bleak emotions. A classic manga style might not have fitted the themes so well. The pace in the animation cell style panels is particularly interesting as it pulls you into a delicate moment of their lives. It is also unusual to see the characters merge into one when they are entwined. Gone are the expected one to two page character spreads replaced by landscapes which further evoke a depressing atmosphere.

Story – 8/10 I haven’t read anything quite so depressing since Ai-Ren (which I loved) and I can’t recommend this enough for fans of dark manga which pull you in emotionally. You read this because you want to feel something, not for the story development. It is like a diary of moments, which individually may leave the reader feeling lost and empty, but the collection gets across the frustration of the characters. The story progression feels intentionally confusing at times and by the end it does not appear much has been resolved, apart from a sad certainty of inevitable misery.

Characters – 8/10 It is difficult to truly know characters with very little dialogue – or is it? This challenges the idea that the reader must be aware of everything, and is genius in the way it picks out moments which drive home how the characters are feeling. They may not be likeable, but they are struggling in the harsh reality of the 1970s, believable in their despair.

Thanks to Drawn and Quarterly for providing the review copy.