Now we get to see the OP art, some fan service and pretty pictures. I like it, it’s fun, but not enough to watch it every episode!

The girls are talking about love. The headmistress has made it clear that anyone caught talking to a boy will be punished, the correct thing to do is hide until they leave. If a Kuniochi (female ninja) falls in love they will be expelled! This shocked me!

Hayato goes for a walk, Himawari insists on going with him, there’s no stopping her! 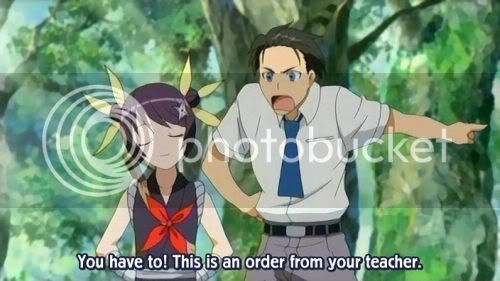 Now we’re introduced to the ‘evil’ characters after Hayato’s life. The ‘Boss’ and Wabisuke and Sabisuke watch Hayato from a cliff. The Boss thinks Hatato is descended from someone who killed her ancestors.

You’re not given the impression they are going to be much of a threat though!

Meanwhile Shikimi the rather serious grey haired girl is searching for herbs, she finds a rare one when she hears a voice cry out that he saw it first, it’s coming from the bottom of a hole where a male ninja has fallen!

Meanwhile Himawari and Hayato get lost in the mountains, due to Himawari’s terrible sense of direction, they share a cute moment touching hands…(kawaiiiii)

…which is ruined by Tsukiyo-hime’s random appearance!

They look in the miso soup to see Yusura with Yonesawa, and Shikimi helping the male ninja out of the hole!

We learn the male ninja’s name is Nanafushi, and he will give Shikimi a very rare ‘One Night Herb’ if she gives him the herb she just found so he can heal his injury. She obviously loves the fact that they share a common interest, it must be love! Eee! It’s so adorable.

He really does give her some of the herb that night, and they start secretly meeting each evening to discuss herbs <3 <3 kawaii.

The other 4 girls are hiding in the bushes spying, Momota (Yusura’s little anime companion) disguises himself as a mouse to cover up a suspicious noise they make. Haha!

The back-story of Shikimi is just the cutest, tragic tale. Her father was strict and used to POISON her with herbs so she could recognise them :,(

but a rumour about their relationship has spread around the school. Three pairs of friends try to pretend to be Shikimi and Nanafushi in front of the headmistress to solve the problem, but she is not fooled! They listen through the roof as Shikimi says she is not in love and that Nanafushi is merely useful, and she will take a herb to forget him. So Shikimi is forgiven. This was so sweet, you don’t want her to forget him! It’s so sad!

Shikimi and Nanafushi meet one last time, both secretly bringing memory taking gifts, but neither of them use them after they part. Shikimi gives the pin to Himawari who stands stunned and forgetful (which made me giggle) and the Boss eats one of the abandonned buns, haha!

I really loved this episode because of the tragic forbidden romance, comedy and likeable useless bad guys. I like the one character focus as well as seeing the group of girls together. ^_^