A note is sent to Hayato stuck to the bottom of a tortoise, 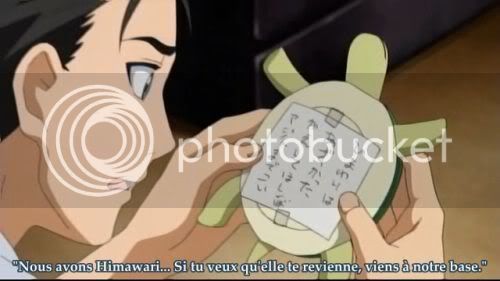 However, boss and her little helpers are so useless they forgot to put directions on…so they go around the forest putting up signposts (haha!). Hayato must rescue Himawari on his own, the girls and Tsukiyo-hime refuse to help! Himawari wonders what the shinobis would do in her situation, she thinks she must take her own life – but Wabisuke points out she can’t protect her master if she is dead!

We get to see Wabisuke’s and Sabisuke’s backstory, the boss rescued them and fed them on goats milk, then they trained to kill in their nappies @[email protected]

The fight between Hayato (holding a big root plant) and the boss (with a huge sword!) is pretty silly, Himawari has managed to get out of the ropes when Wabisuke ran off after she said something to upset him. Himawari tries to save Hayato but isn’t strong enough, and of course all the other girls turn up to help out.

When even that seems doomed, Azami turns up with the chef – it turns out he wrote the family tree for work and it’s not genuine. Hayato isn’t related to Oda Nobunaga, and isn’t the enemy.

As a reward for saving Hayato’s life, they make him wear a strange costume…and attend a master ceremony, so he is now officially Himawari’s master forever!

We’re left with an ominous ship in the clouds, and a moody ninja …the battles will now begin! Bit of a predictable end but I liked the twist that the family tree was wrong, and that the stupid, comical bad guys will be replaced by more serious foe!

Ooo, now I can’t help but wonder what direction they’re going to take the second series. Will it be more romantic, with Himawari maturing and being tempted away from her master by other males, will any minor characters like Nanfushi, Tsubaki, or Komurasaki return, will there be any new transfer girls? Is it going to be more action orientated with bigger and more powerful ninjas after Himawari? Will Hayato’s birthbark be explained and turn out to be important, does he have some secret power? Will Yusura ever look cuter than she did in the bunny costume?! Will they ever shink to little children again, fall over and look cute? Will the art/animation quality improve? Will Hayato and Himawari kiss?!?! Will Momota meet a female Momota and have little baby Momotas (that would be awesome!). Will we ever find out why people think a kappa wandering around is perfectly normal?!?! I just can’t wait, Eee! :)

One thought on “Himawari! #13 End and thoughts for the future”