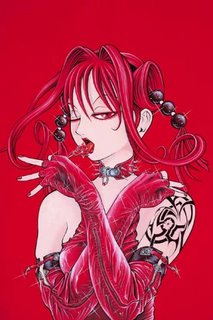 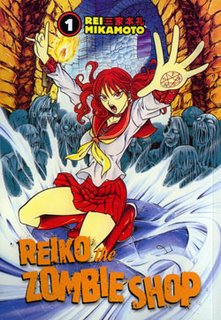 I’ve been trying to put my finger on why this manga disappointed me. The storyline is ok, for the little girl murders *spoilers* the older sister gone mad because her little sister was annoying, going on a killing spree, and Reiko redicting her own life to destroy the murderer was pretty cool. the chracter of reiko is better drawn than the annoying magical girl chracters i’ve been reading of late, but it’s still not edgy enough. The rest of the chracter design in cliched and annoying, particularly the rock star and egotistical reporter woman. The girl abused by her father, and girl pregant with her teachers child are such dull ideas, would have been much more fun if the mother had molested her daughter, and the teacher had been murdered by the quite hard working girl. Nothing really surprised me here :(

The above pink picture of Reiko is SO MISLEADING. She’s not nearly this cool in the manga, always explaining who she is and using the same boring summoning spell. Might be worth copying that picture though it’s awesome! Love the eyes, but overall the composition of the pages just isn’t egdy enough for a horror to make it anything special.