Mushashi…not to be confused with Mushishi…><

Keichou era: 1596-1615, events such as Keichou Invasion, Battle of Sekigahara, formation of Edo Bafuku and the seige of Osaka.

The events and chracters are real although some historical facts are altered.

We are first introduced to Musashi through a duel outside Ichijouji temple. He has an unusual fighting style using sleeping bullets and an electric sword, that hurts but does not kill. Even against Denshichirou-dono and his band of thugs he still escapes unscathed.

Danjou-san approches him on the streets of Osaka, he wishes for Musashi to help him protect the princess – but Musashi is uninterested. The princess is in danger from the yaakashi which gained power after the battle of Sekigahara.

Musashi and his Rounin companion are strong fighters who often take castles, and Musashi is disappointed Osaka castle is too dangerous for them. When they come acros a carriage in the forest they know an ayakashi must be involved, so when the ayakashi manages to kidnap the princess (who is a lot more feisty with a sword than expected) Musashi and the Rounin fight the Ayakashi to rescue the princess. Musashi uses his anti ayakashi bullets and Rounin used his Sword of Desire, Law of Destiny to defeat the monster.

There is a strange appearance of a woman firing a triple barrelled gun at Musashi at the end of the episode, perhaps this will be explained later in the series…

Actually quite enjoyed this rocky number, but I wonder how many other people were singing “Who you gonna call?! Ghost busters!” *giggles*

Loved the intro artwork, look closer into the red…

I really dislike this kind of chracter design because the facial features appear clumsy. His hands and poster also appear clumsy and slghty out of proportion to me. That said, he is a very enjoyable chracter to watch fight and has a carefree attitude towards his enemies and believe in his own skill. It’s unfortunate that the thing he has to do involves spinning round in a circle and looking pretty silly…

Yes…he’s wearing a cape. Enough said I think. Bit of a lame fighter even with the Occult sword.

Perhaps I should have included her in the monsters section, i mean those breasts are as big as her head! Yukky chracter design, looks too masculine.

Maybe they just need a hug…

The evil Ayakashi that kidnaps the Hime (breifly), I don’t need to eat, I’m a ghost. 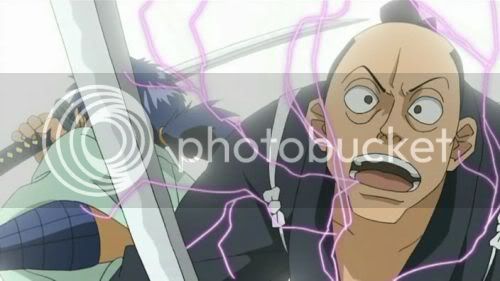 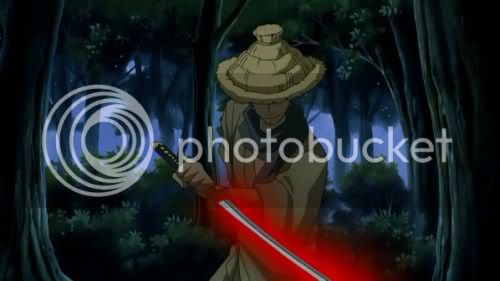 Sword Of Desire, Law of Destiny.

Another cool Law of Destiny weapon.

Something very evil is happening…but at least it’s pretty.

Lots of warriors have been slain (this is my favourite picture).

One of the historic anime pictures, with static figures, which is midly annoying.

Even the moon is evil.

Not keen on the end music, however, very pretty pictures of the Hime.