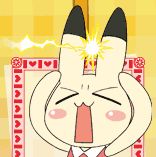 Each episode of Animal Yokocho represents two episodes – so episode 5 is actually 9-10/70…not cufusing at all: espicially since I’m also watching them out of order O_O!

9, Secret Diet: It’s funny, I prefer Issa, Kenta and Iyo as animals rather than children, if they were children I probably wouldn’t watch, or at least it would be more disturbing to see purple Dieto Jiusu coming out of Iyo’s ears! Mud wrestling as part of a diet plan…sounds like a plan!

10, Fan Letters: aaaaaaw when kenta dresses up as a mosquitoe(ka) catching(tori) dog(inu) it’s soooo cute. I like word plays because it helps improve my Japanese.

Dosukoi:words of encouragement for a sumo wrestler.