The fake Akagi points out that the real Akagi worked out the 65% chance of it being 3 Shan Ten tiles, so he’s nothing special. R. Akagi suggests he has instinct and the f. Akagi challenges him to prove it by picking out 3 tiles to make a 4 Shan Ten hand. R. Akagi accepts a 2 million cash bet against his wages (after his initial desire for f. Akagi’s arm should he lose!). Miraculously he wins, and when the others realise he has actually cheated and switched tiles from the pool it doesn’t matter because he picked the 3 correct tiles as well.

Returning to where the 3 factory workers are scamming Osamu’s wage money, he watches how they cheat by ‘tunneling'(they include the tiles they want in works, not very subtly but Osamu doesn’t spot this). Then as they leave he bets his previous winnings against the evil three’s winnings/life savings, if he can draw the right tile to win. He cheats again – by switching a tile when he puts a tile back, and drawing the tile he had seen the sneaky Kawashima put there earlier.
Notes

Ta zi: Having two tiles that are either pairs or number tiles adjacent to each other.

Toi Toi: getting nothing but three of a kind from calling other people’s tiles.

Award for the most patronising person of the day goes to…fake Akagi.

He’s also quite attatched to his limbs… 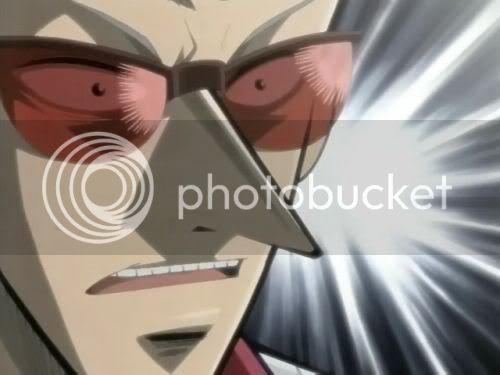 Real Akagi – gives as good as he gets. I love the hand artwork in this show! 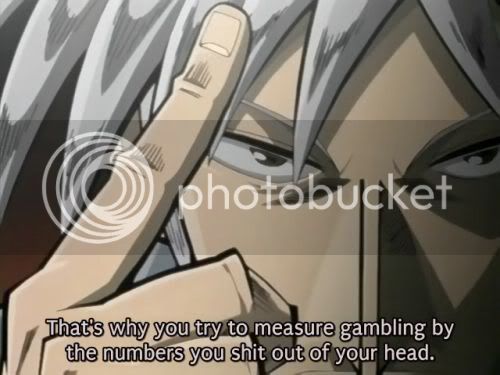 My wish was granted, he thrashed those cheating bastards at their own game!

The moment of realisation dawns for Kawashima!

Dropping the tiles on the table, he can see through tiles… <3

Cheated *AND* drew the correct tiles! This is why i love this show so much. It gives you what you want and more.

Akagi is super sneaky, switching tiles when he puts them back.

Reasons i loved this episode: it’s not what happens, it’s the things they say, and Akagi’s attitude that make this a joy to watch.

F. Akagi: “You’re saying you got this by instinct rather than probability?”

It’s an enjoyable idea that somehow r. Akagi is magical and can pick the right tiles. R. Akagi is in such a different mindframe:
“It’s like saying you know everything about the ocean and you’ve gone out as deep as you can stand.”

I hope he beats the crap out of those 3 thugs next episode…please Triad…make more fansubs soon! Pretty please? :)