By far the best manga I’ve read this year.

Itou Denji (Kurou Denji) works for an oil cultivation company and is approached by Todohomi a Kegen agent. A White Gauna monster is murdering people in the city and Itou reluctantly transforms into a Black Gauna to fight it. The problem is that Black Gauna also murder people, and Itou has been hiding with his fake name away from prying eyes.

The investigation of the monsters is lead by Sakijima, a detective for the punitive forces ministry. However, the resurfacing of Itou arouses the interest of Kegen Hall and other shady chracters. He’s not going to give up the investigation without a fight though.

Nayuta a white Gauna is sent to deal with Itou but she is unruly and her decapitation mechanism is activated to control her and bring them in. Todohomi travels to talk to the leader of the White Gauna Headquarters, hoping to discover the location of Itou…

Where is Itou? Can he regenerate? What are the Gauna? Who are Kegen Hall agents? How many White Gauna are there? What is the 4th Chronicle group?

An oil worker at the cultivation plant.

I was not expecting this! Love the element of surprise in this manga.

It’s just not healthy to be a troop.

Investigator for the punitive forces ministry.

He’s pretty angry when his authority is undermined. 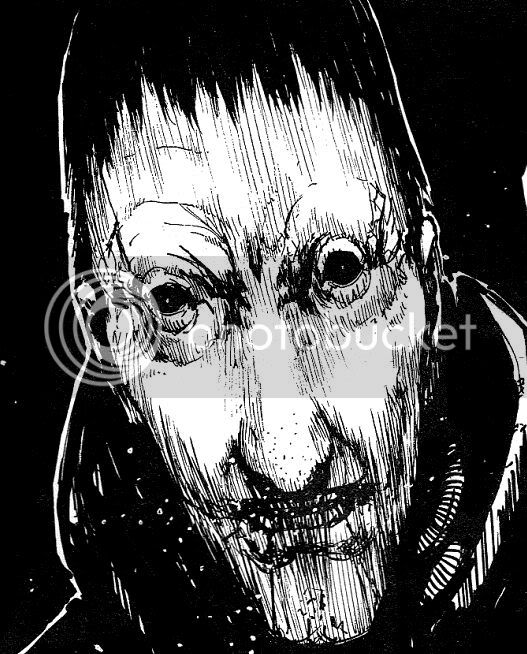 I love his eye artwork, he looks ill and bug like.

Love her design, seems to have been grown within all this biological monstrosity.

Trains take Todohomi outside of the city. I want to know what the massive tubes are.

Inside the White Gauna Headquarters. What is growing in there?

Overall I found this addictive, it had a great pace of story and I particularly liked the way the first volume is very image heavy and the next two volumes start to explain things. The fight scenes where the Gauna tump on/through the building where very effective, you can imaging the rock being thrown around and the sound of it!

It’s the little things like the detective’s asistant walking into the top of the doorframe, the imaginativeness of a head detachment remote switch, and the depersanolized troops that give this cyberpunk/sci-fi manga it’s overriding feel. I’d like to see more towering city landscapes but that’s just my preference for that kind of art. I love mangas like this which provoke so many questions and leave so many things tantalizingly unexplained.