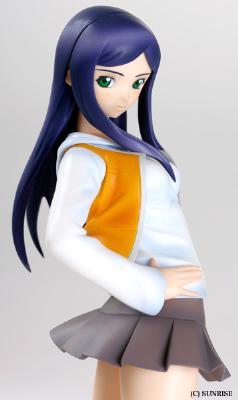 [This is another article about otaku and maids that i found interesting, especially all the different types of places created for the ‘otaku’ ImeCla, no-pan (no panties), Pink Salons and soap land(?!). Japan never ceases to amaze me…and it’s great that they mention female otaku who want pictures taken of them in costumes, i really want to cosplay now, recon i should cosplay Natsuki Kuga (see picture)]

Akihabara has long been known for its overwhelming array of electronics stores like Ishimaru Denki, Onoden, Satomusen and many more.

However, the area has undergone something of a makeover recently with posters and figures of animated beautiful girls plastered all over the place and the emergence of cafes and restaurants devoted to “cosplay,” featuring girls dressed as animated heroes, maids, etc. Even a public area, such as the floor space of JR Akihabara station, has got into the act, with a 3-meter-round poster of the face of a beautiful girl appearing in an animation video.

Kiichiro Morikawa, a professor at the Kuwasawa Design Research Institute, said, “An increasing number of animation goods and game shops have opened their doors and changed the area into an ‘otaku’ (geek) Mecca.”

Psychologists say these “otaku” or geeks are regressive, have poor social ability, and have never fully matured as adults. “Therefore, they are not good at communicating with others, cannot date real human beings, and instead adore an imaginary character,” said one.

Self-confessed “super otaku” Tetsuto Fujiyama says, “There are five different kinds of geeks in Akihabara. The oldest denizens are the electric appliance geeks, who come to purchase electronic parts and other equipment. Next are the PC geeks, who like to build their own original computers that run as fast as possible. Third are TV animation geeks whose brains can’t distinguish between reality and the animation. The fourth group are the magazine geeks who have made original animation fantasy stories influenced from TV and game animation and publish them in small magazines circulated among themselves. The last group are those geeks who love to play video games in which erotic animation is used.”

WC, who runs an information website on Akihabara called Akiba WC Headline!!, says, “Akihabara is a dream town for men. PCs, digital cameras, geek magazines, electronic gadgets and animated goods, you name it, Akihabara has got everything that men like. That’s why almost 90% of the people you see here are men.”

Local landmark Radio Hall, located in front of the Denki-gai exit of JR Akihabara station, always carries the most popular products of each generation. Now, they have plastic model figures of beautiful girls from TV animated series and superhero robots for hardcore fans. There is a 380,000 yen life-size Evangelion (video game character) figure, as well as perennial favorites Gozilla, Kamen Rider, Ultra Man and Kikaida. When Tetsujin28 (a famous TV robot character) was released, 12,000 figurines were sold in the first two days.

Simultaneously, video game software is another big hit in Akihabara. When a brand new popular video game is released, the “otaku” line up in front of the store at least a day before the release and camp outside in huge makeshift cardboard shelters. The reason they do this is to get one of a limited number of original gifts which are usually presented to the first customers who purchase the new product. Enthusiasts frequently access each store’s homepage and actually visit the shops each week to find out and compare who is giving away the best gift items.

“Sometimes, it might be just an original telephone card, but at other times, it could be a life-size cuddling pillow with a print of a beautiful animated character girl on it,” says a video game magazine writer. “They also give away bed sheets with a life-size print of the hottest ‘otaku’ pin-up on them, so you can see how information research turns out to be a kind of war.”

About a month ago, the world’s first animation movie theater, “Akihabara Oriental Comic Theater,” opened. Not only will it show movies, it will also serve as a forum for fans and creative talent such as animation writers and voice actors.

When this many “otaku” boys get together in Akihabara, someone must feed them somewhere, so cafes and restaurants, especially for them have opened one after another. At the Cure Maid Cafe, all the waitresses wear maid costumes. “There are seven waitresses at this moment. They’ve got pretty names such as Pudding and Chocolate,” said manager Masato Matsuzaki. “We also have a website on which customers and waitresses can chat. We get nearly 1,000 page visitors a day, which is unbelievable for a restaurant.”

The maid’s skirts at Cure Maid Cafe aren’t as short as other restaurants; they tend to be longer and more elegant. So why are the “otaku” so crazy about ther maids? “It’s because of the image that a maid is always supposed to obey a customer. That has a sort of healing or calming effect on a guy,” explains Matsuzaki.

On the other hand, waitresses at another “cosplay” cafe, Cafe & Kitchen Cos-Cha, do wear very short skirts. “The waitresses are all in the early 20s,” said manager Masahide Kamei. “There are always three or four, whom we call angels, serving customers at all times. Depending on which animation or video game is popular, we change the costumes of the angels to stimulate the interests of customers.”

What fascinates customers the most, Kamei added, is the costume change event that is held three times a month. “The most successful event we ever had was the school swimsuit pageant last December. Almost 300 people lined up in front of our cafe before the 6 p.m. opening time. It was impossible to control the situation. Around 8 p.m., an angel came out and tried to call for order. The audience was actually touched by her sincere attitude and applauded. In response to that applause, she took off her coat to reveal her swimsuit, and that brought a bigger cheer.”

In addition to all the cafes, there is a “cosplay izakaya” (small Japanese-style bar) called Little BSD (Little Beauty’s Satanic Dining). “Waitresses wear different costumes everyday. We have nearly 15 waitress now. Customers like to have their photo taken with the waitresses,” said the bar manager.

If you’re hungry, try ordering a rice ball. One of the Little Beauty Satans will bring you some rice and seaweed. Using a cutter, the little beauty shapes rice balls into triangles and other shapes, and feeds you by hand.

However, don’t get take this as invitation, cautions Morikawa. “They are not ImeCla girls (Image Clubs in which you can act out your fantasy in a situational setting as nurse-patient, teacher-student, commuters in packed train and so on). Nor is it a a ‘no-pan’ cafe (where mini-skirted waitresses with no panties serve customers). These shops at Akihabara are not in the sex business because for geeks, fantasizing is much more important than actually doing anything with girls.”

It should be mentioned that there are also female “otaku” who are into costumes. The adult convenience store M’s Akihabara is selling lots of sexy costumes. “When a girl tries one on, often she asks us to take a photo of her. There are too many customers like that, and our walls are plastered with their photos,” said a store PR guy.

Tetsuma Yamada, who writes about the sex industry, said: “First of all, the Akihabara area isn’t authorized to have sex businesses. Therefore, there are no Pink Salons (hostess clubs in which a hostess sits next to a customer and sexually stimulates him with her hand and mouth. Since no one gets naked, the salons are legally defined as bars). Nor are they a Soap Land (where women give customers a bath and aesthetic massage).”

Another unique shop in Akihabara is the so-called video box that features gorgeous rooms and a big collection of animation and adult video tapes. “Even diehard fans will never get bored,” said a salesperson for one such place, Hanataro.

In this constantly changing world, you never know what comes next. Will “otaku” rule the world? Stay tuned.

For a dictionary of adult entertainment, check out Erodas at http://www.nukinavi.com/jiten/index.html