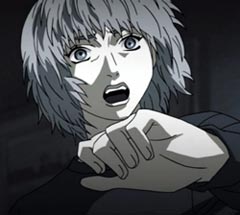 Enjoyed the fighting between the children of the lesser god and the gilgamesh, wish you saw more of it rather than heard it…the background drum music was awesome, i bet the soundtrack’s good! The teleportation bit was cool, but you’d think they might have picked up a few weapons…i mean, they are being chased by three groups of people now!

I wait to see more of Tatsuya’s powers, I hope his personality evolves with his powers.

Still liking the tuning forks during the end credits, simple yet effective.